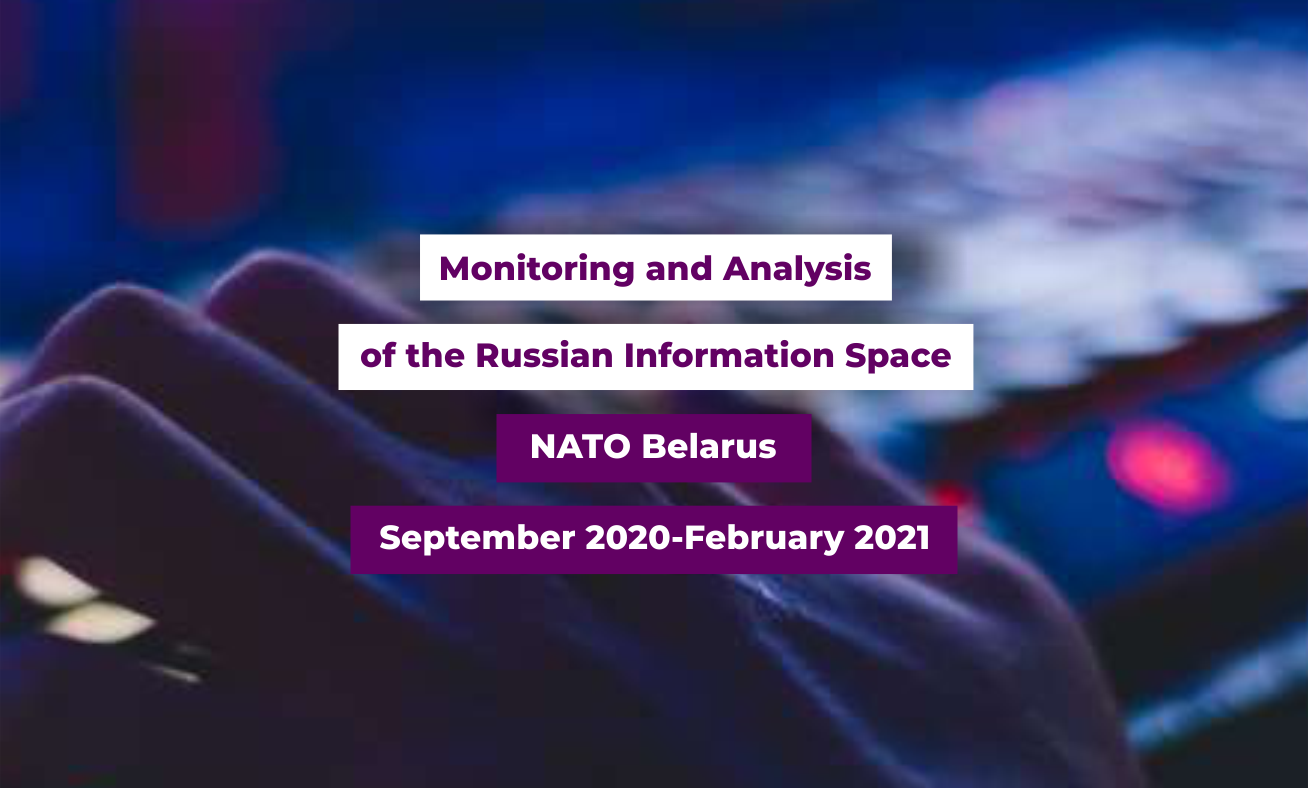 Monitoring and analysis of the Russian information space as exemplified by the articles published by ria.ru, rbr.ru and russian.rt.com between 31 August 2020 and 14 February 2021.

Below are presented the partial results of the monitoring conducted by the Center for Propaganda and Disinformation Analysis as a part of the “Monitoring and analysis of the Russian information space” project and implemented during the period of 3 August 2020 to 28 February 2021. 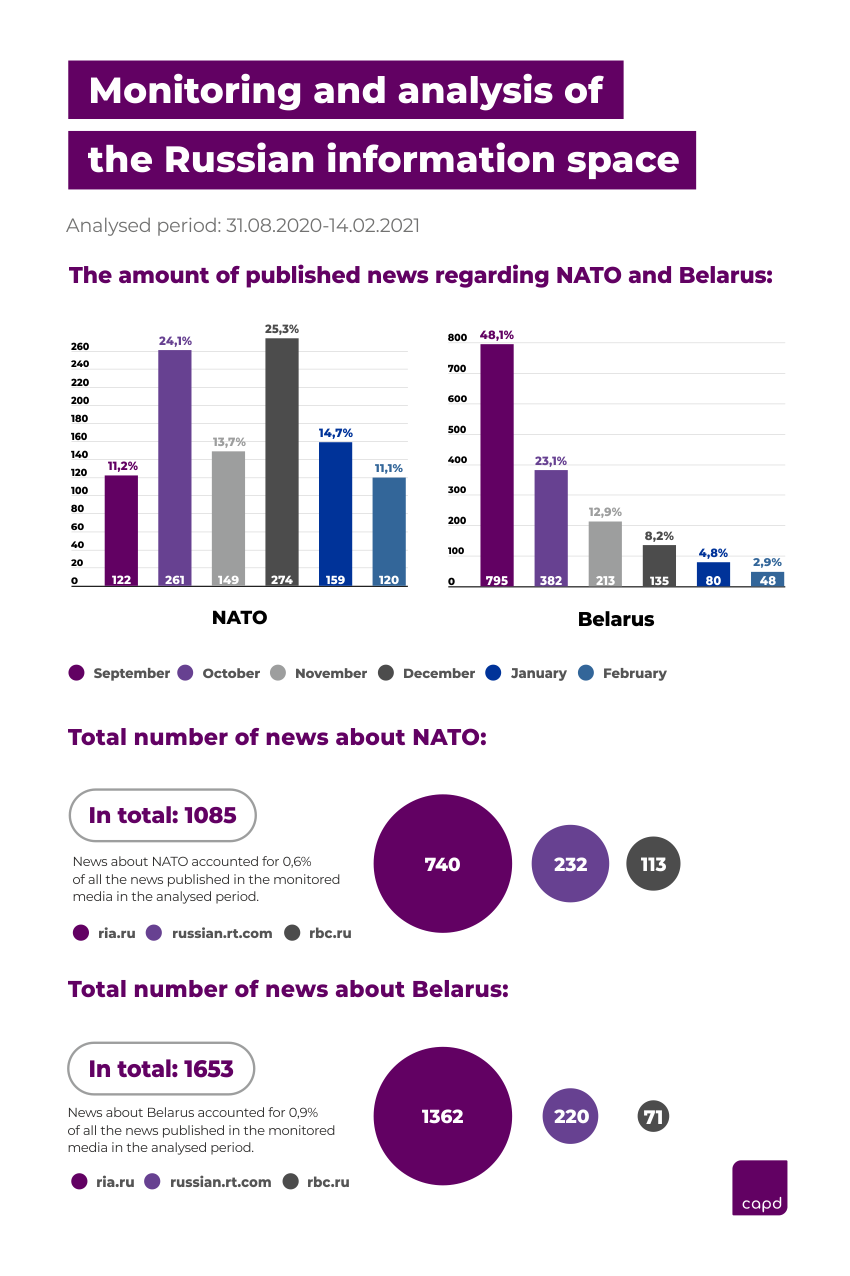 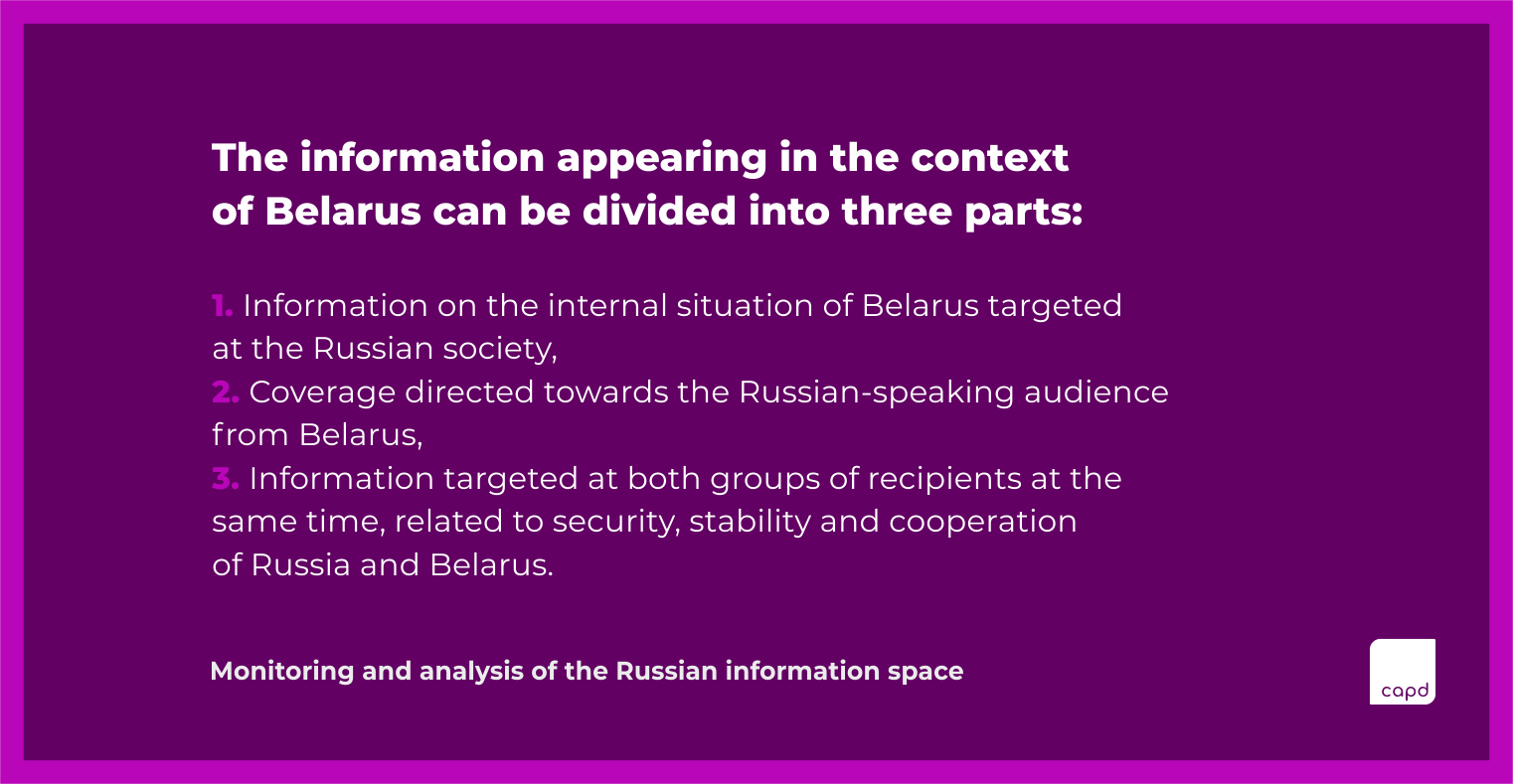 The information appearing in the context of Belarus can be divided into three parts:

1. Information on the internal situation of Belarus targeted at the Russian society,
2. Coverage directed towards the Russian-speaking audience from Belarus,
3. Information targeted at both groups of recipients at the same time, related to security, stability and cooperation of Russia and Belarus.

In the studied period, Russian media were trying to emphasize the tremendous value of the cooperation of both countries in all possible areas, and present Russia as a defender of stability and sovereignty of Belarus. Russia was displayed as a protector of Belarus on the international stage (from NATO's aggression), as well as on the domestic level in the context of the stability of public life (support of the nation in the fight against the archaic system).

There were very few references to the Belarusian-Russian military cooperation in the analyzed period, but some information indicated that it was being strengthened.

An important topic for propaganda purposes was providing Belarus, as the first country in the world, with Sputnik V vaccine. The COVID-19 topic in relations of both countries was mentioned in the context of predominantly positive reports – the opening of borders, supply of vaccines, scientific cooperation and Russian support.

Below are presented the most important mechanisms and techniques used by the monitored Russian media as exemplified by the topic of Belarus:

- The people who were spreading the message were primarily the Russian politicians, especially V. Putin himself. Citing the Russian officials was aimed at strengthening this message. Particularly when citing or referring to V. Putin's statements, which have been treated as doctrines and even a “revealed truth”.

- Since October 2020, a mechanism that can be described as “stabilization from the top” was being intensively built. It was based on imposing a rhetoric, discourse and actions towards the return to normality or stability, presenting measures and political declarations that were supposed to suggest that the protests were starting to fade despite the ongoing high social unrest. 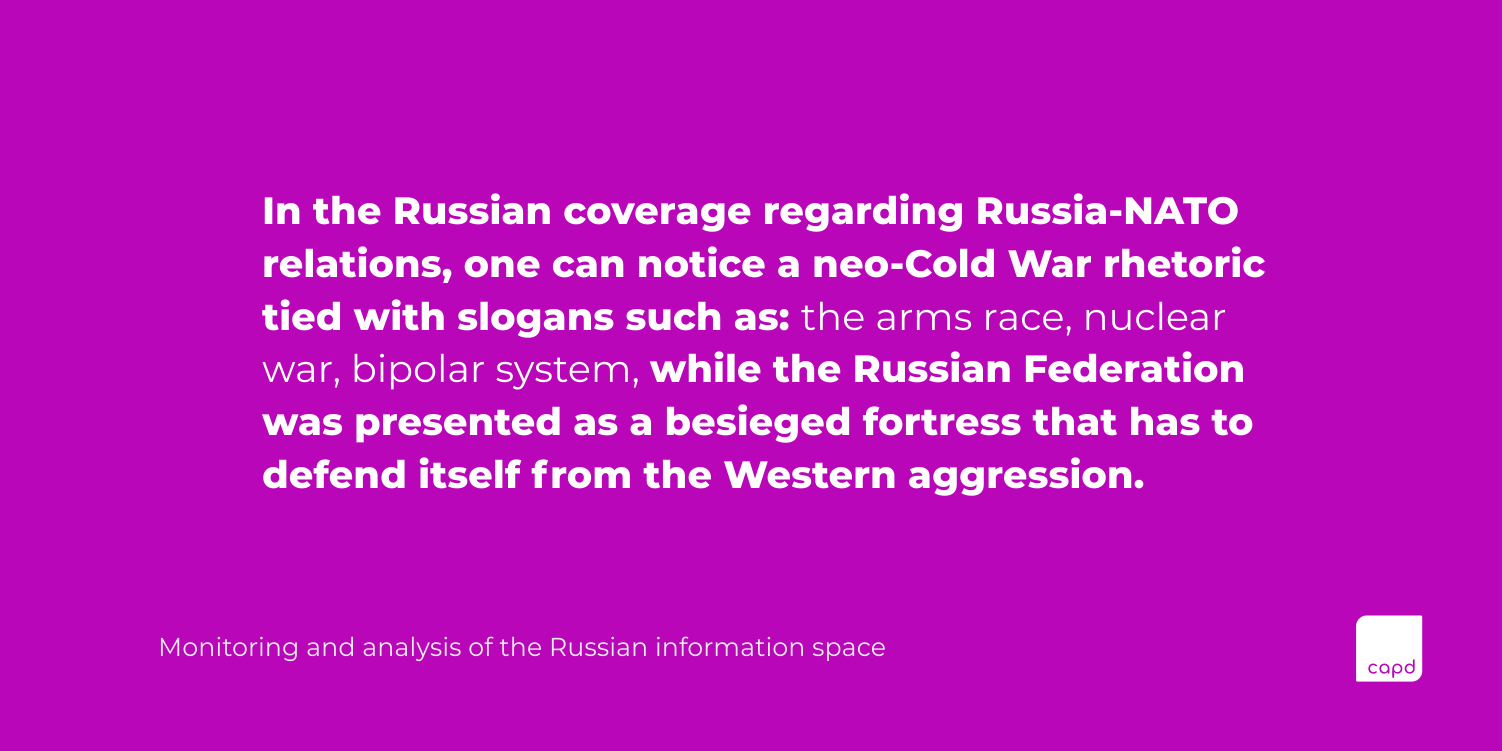 In the coverage regarding Russia-NATO relations, the Russian Federation was showcased as a besieged fortress, which has to defend itself from the Western aggression, and a victim of an unfair game. According to the studied media, the reason behind such situation lies in Western Russophobia, viewed as a panic fear but also hatred towards the Russian state.

- At the end of 2020, media started underlining the strategic significance of Belarus with regard to Russia and its relations with NATO. Additionally the Russian-Belarusian sphere of security was being associated. A commonly used technique was discrediting, often combined with ridiculing the opponents, such as the Joe Biden administration or A. Navalny and protesters connected to him.

- During the entire monitoring, the neo-Cold War rhetoric tied with slogans such as: the arms race, nuclear war, bipolar system.

- From the media perspective, Russia was presented as a  “creator and guarantor of peace”, while the U.S. and NATO – as an instigator and destabilizing actor. 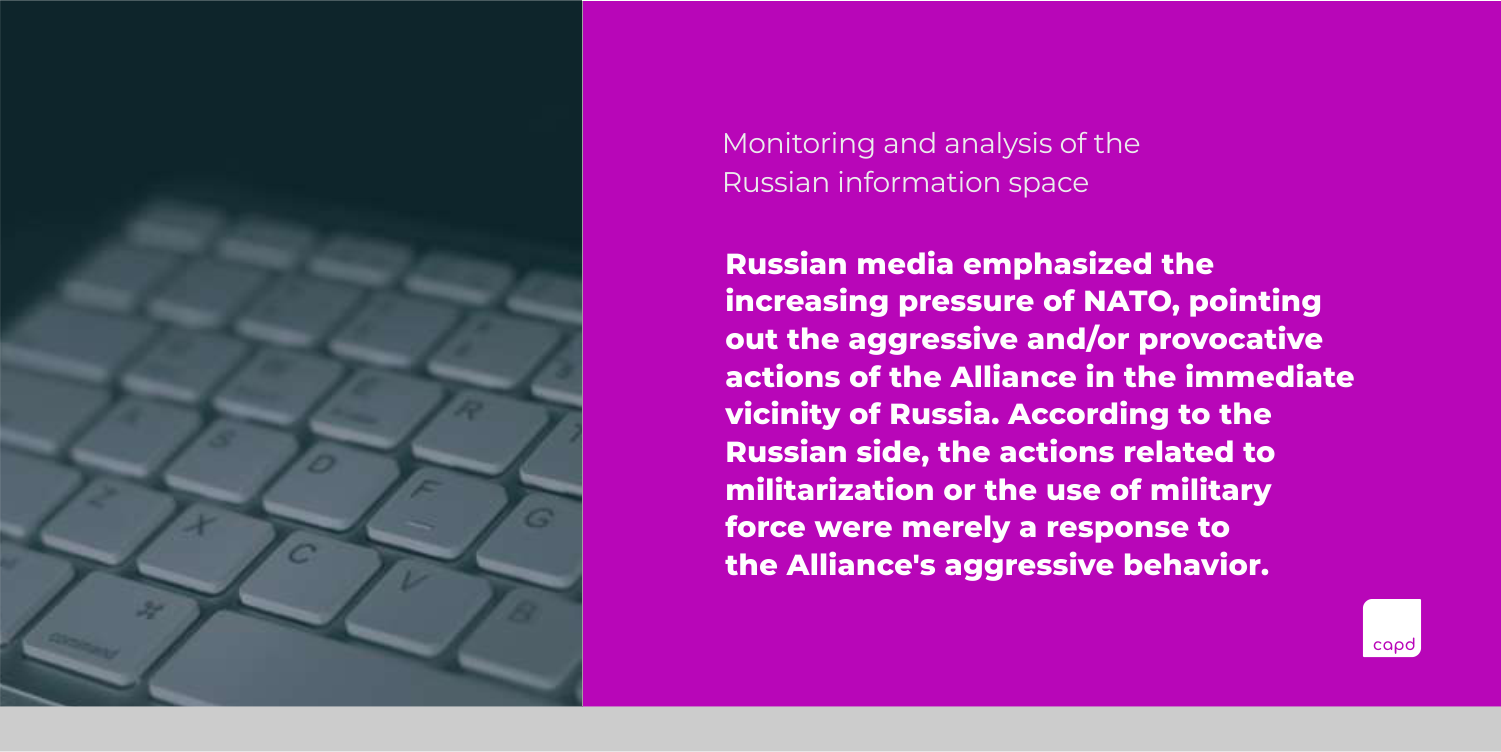 During the analyzed period, Russian media emphasized the increasing pressure of NATO, pointing out the aggressive and/or provocative actions of the Alliance in the immediate vicinity of Russia. A considerable part of the articles was showing disputes inside NATO, revealing that the collective defense of the Alliance is just an illusion.

At the same time, Ukraine was described as the Trojan horse of the West against Russia and the post-USSR area. However, the main burning topic was not the war in Eastern Ukraine, but the issue of the Russian base in Crimea, possibility of training and joint NATO-Russian drills. The message also suggested that Ukraine rushed in to the path leading to the integration with NATO, which threatens Russia.

The topic of armaments, new weapons, military equipment etc. was visible in each monitored week. It mostly included praise for the Russian solutions' superiority over NATO's. However, it was not just about the new solutions that are or might be included in the military. There was also a mention of Soviet era weaponry, which despite its age it is still better than the one manufactured in the West according to Russians (propaganda of success).

An important topic that could be observed each month was the military provocations of both sides, and therefore the mutual attempts to violate borders, and Russia-NATO military units' tracking. In the media reports there was a frequent topic of border violations or, perceived as dangerous, concentration of troops along the border. Russia was trying to present itself as a an equal player against the U.S. and a proportionate opponent of NATO, while stressing that the measures were peaceful. According to the Russian side, actions related to militarization or the use of military force were merely a response to the Alliance's aggressive behavior. This information did not refer to political relations, but its nature could have been directed at showing the fragility of Russian-NATO relations.

READ THE FULL REPORT: This article is part of the “Monitoring and analysis of the Russian information space: the image of Poland, NATO, European Union, United Kingdom, Baltic states and Belarus in the Russian online media outlets”.